Last week, the doctor sat me down and told me that for the next 8 weeks, gluten is banned from my life as we see if it clears up my stomach issues, so, fair warning: for this time at least we’ll be ditchin’ the dairy and gluten on this blog!
Slightly panicked by these turn of events since I didn’t know what to eat with no dairy and no gluten (and after a minor breakdown where I declared I’m never going to eat again)- I pulled my socks up and remembered an app my friend Caroline had recommended to me a few months ago. The app is called Yummly; once you open it up, as well as telling it your likes and dislikes, you can also input your ‘diets’ and any food group you’re allergic to, which include all the major allergens;
Dairy, Gluten, Eggs, Peanut, Seafood, Sesame, Soy, Sulfite, Tree Nut, Wheat. So for example, I put no dairy, no gluten, and no red meat (or olives and brussel sprouts- yuck!) They also cater for certain diets which include; Lacto vegetarian,Vegetarian, Ovo vegetarian, Paleo, Pescetarian and vegan. You can change these settings at any time too, which means if you have someone coming over to your house for dinner and you have no idea what to cook for them, you can quickly find a suitable recipe on the app; sometimes trying to alter a recipe for allergens is tricky and tasteless once you’ve substituted a lot of the ingredients, so I think this is a great idea!
You can then scroll through recipe upon recipe of different foods and drinks, based on recipes Yummly think you will like from the information you’ve given them. Once you’ve found a recipe you fancy trying, you can ‘Yum’ it (basically saving it on a special list so you can find it again later) and you have an option to add the ingredients from recipes you’d like to try onto a handy shopping list! So far I’ve tried some great dishes, I found a few great smoothie and juice recipes too and the more you ‘yum’ items, it seems the more tailored to your likes it becomes. It’s also worth mentioning that you can input what level of skill set you have; I went with beginner but there are harder ‘levels’ you can choose too depending on how good you are- beginner seemed my level since I once set the microwave on fire after trying to cook microwavable popcorn, but that’s a story for another time…
The app has been a great intro into different ways to cook gluten free, including substitutes and so on;  I have a firm grasp on what I do and don’t like in the dairy free world; but add gluten on to the list and it all becomes rather scary- so I’m needing all the help I can get, and Yummly so far is giving me some great ideas! 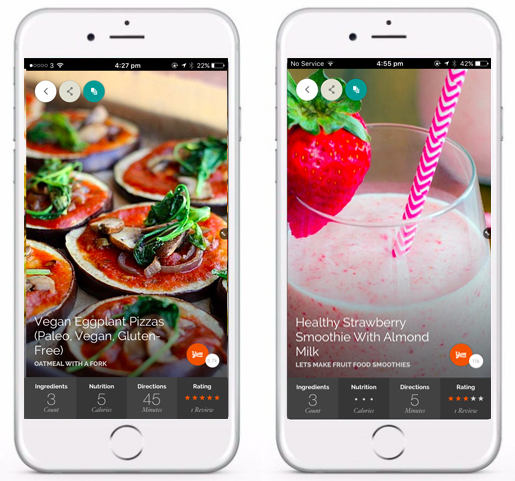